Why God Why? Faith in Coming Out (A Series)

When someone comes out, it’s world-changing moment for them, their family, and their friends. No matter what level of support there is in the coming-out process, it requires everyone involved to reflect on their role and relationship to the person coming out. For families coming from faith perspectives, this includes reflecting on their relationship with their communities of faith, to the teaching and values they’ve held, and to the God or gods in which they believe.

I recently led a conversation at PFLAG Twin Cities about the role of faith and religion in the coming our process. Here’s a little bit about PFLAG: 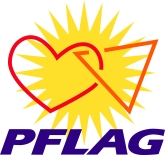 Founded in 1972 with the simple act of a mother publicly supporting her gay son, PFLAG is the nation’s largest family and ally organization. Uniting people who are lesbian, gay, bisexual, transgender, and queer (LGBTQ) with families, friends, and allies, PFLAG is committed to advancing equality and full societal affirmation of LGBTQ people through its threefold mission of support, education, and advocacy.[1]

While the Twin Cities chapter of PFLAG is not affiliated with any religious organization they do believe that people can make a difference and that treating others with kindness and patience are great virtues.

It was an open and respectful discussion about how religious beliefs change, adapt, or disappear in the face of coming out. To kick off the talk, I wanted to give the audience a different framework on how to look at religion. This was necessary to do before we delved into the way faith impacts the coming out process. I talked about three paths that the role of faith can take in the coming out process:

So, I invite you along in this series of exploring the impact of faith in the coming out process!!!

Filed under Why God Why? Faith in Coming Out

The Ocean, the Boat, and the Wind: Part Three – From On High

We left off with the posing of this question: “What made the majority the majority, and furthermore, what actually gave them the power to name?”

In the immediate cultural context of heteronormativity, it is the majority population of heterosexual persons that become the self-as-norm and the homosexual person as the other-against self (obvi). But is it simple enough to say that the power to become the majority arose from the efficacy of sexual reproduction, wherein homosexual acts are seen as deviant—an anomaly? However, the anomaly of homosexuality (as we understand it today) only became abnormal at the earliest with the invention of sodomy as a category of sin within the medieval Roman Catholic Church or at the latest with the invention of heterosexual and homosexual categories in the late 19th century. Sure, men fucked men and women fucked women since time immemorial, and a lot of people thought it was weird or gross or wrong, but it wasn’t homosexuality.

So, if we are to attempt to pinpoint the inception of these hetero/homo dialectics, we can be safe to launch our dart within a span of several hundred years. But the fact remains that within that span, the one who gave the power to name the homosexual person as ‘abnormal’ was…the Church. This illustrates a principle (or illusion) that power is granted from transcendence. The metaphor is as ancient as Godself—wisdom, enlightenment, and power come from above and rest upon the below-ones who are worthy. Another ancient metaphor illustrates that those who are touched by the transcendent become transcendent themselves; to be touched by power is to become powerful. 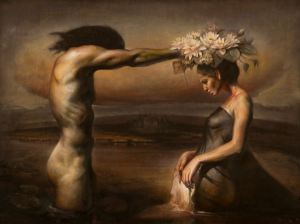 The anthropologics is that societies form and determine the parameters [boundaries] of the transcendent and the mundane. This practice is a part of religion, because religion is a discourse based upon ultimacies and transcendencies; it is the discourse that shapes our understanding of things beyond our understanding, ascribing meaning to observations otherwise without tangible meaning. That ‘God’ fits within the discourse of religion is only because a premise of classical theism (and probably a whole sort of other theisms) is that God is beyond understanding. In some theisms, God can be understood but only within certain degrees, ranging from metaphors of disinterested creator to personal friend and companion. The point, however, is that classical theism sets up the dialectic of above and below, wherein God is above and humanity is below. If we concatenate these lines of inquiry, we link the metaphors of power, transcendence, and God.

When we ascribe something to the ‘realm’ of God, we are making a claim to its importance and ultimacy.  The irony, then, is when we say “God is love” or “God is sovereign,” we are less so saying things about Godself and more so saying things about ourselves and our values. This speech act exists in spite of and apart from a belief in God. If God exists, we can only understand God’s existence through the speech act of assigning our concept of existence onto God. Paul Tillich once said that God does not exist […] because God is beyond essence and existence. Following in a similar radical line: if God exists, then God only exists because we say so.

All of this is to illustrate the following:

In conclusion, what we say about God, about what we consider to be ultimate and important, the source of our power is used against others to support ideas about ourselves. This is the basis of heteronormativity.

But there is still hope, because these axioms of heteronormativity fail on one particular premise. As a case study, heteronormativity based in conservative religious fundamentalism fails to recognize that the power of religion is not in religion itself, but in its use. They believe that the premises of religion themselves are what justifies their prejudice.  Rather, it is themselves that justify their prejudice.  But take religion proper (theism) out of the equation, religion still remains (system of ultimacies). They are usurping the subject of religion, objectivizing it in the same manner as they objectivize the minority, the other-against-self (and we all know another term for this usurpation is idolatry.).

True and good religion is not usurpation of the object of our ultimacy but participation with the object of our ultimacy. Through this we realize the object is actually subject, and that it desires us as its ultimacy as well. This symbolic language is used to illustrate the point that it is favorable to practice love as power in relationship rather than hate as power in estrangement. The demonstration of the relational intimacy between a subject and its subject of ultimacy fosters mutuality wherein the power experienced is shared to the benefit of both subjects. If we part from this discussion with only a utilitarian ethic, we can be happy enough to leave with an ethic wherein both parties benefit rather than one at the expense of the other.

So, maybe the lesbians are on to something (winky face). But if we are following through with the stereotypical premises of the first post—that lesbian relationships embody a certain degree of romance more than gay male relationships—I fear that we may be leveraging heteronormativity unto gay male subjectivity. After all, the modus operandi of heteronormativity is to judge the other-against-self using religious premises to justify its own self-as-norm prejudgments.

So, instead of levying these heteronormative prejudgments upon gay male bodies, subjectivities, and ethics, perhaps we must participate in them instead. I am intrigued to explore the concept of love and romance from a gay male perspective within the context of a condemnatory heteronormative culture. The purpose of this is to not only annunciate a unique concept of romance in which gay males experience and participate, but to also develop a concept of queer romance that is distinct yet relatable to gay male and lesbian concepts of romance. My hypothesis is that the findings will be intriguing at the worst but world changing at the best (even in the smallest of worlds: the self). I think it will help construct queer ethics as well as open up possibilities to religious and spiritual experience otherwise not explored in LGBT communities.

Part One introduces a problem of love and romance in the heterosexual/homosexual dialectic. Part Two explores the contours of heteronormativity.

Filed under The Ocean, the Boat, and the Wind

Are there any errors and/or contradictions in the Bible?

One part of my answer to this is the question “What kind of errors?” However, my first gut reaction to this question is: “Sure there are, but what’s the point?”

Lettuce answer the first question: “What kind of errors?” Because we live in an age of information, I decided to look up these errors and contradictions.

Matthew 19:26 – “But Jesus beheld them, and said unto them, ‘With men this is impossible; but with God all things are possible.’”

2 Samuel 6:23 – “Therefore Michal the daughter of Saul had no child unto the day of her death.”

Now, let’s give Michal some credit; she could have had all five sons on the day of her death.

How about some errors?

Leviticus 11:20-21: “All fowls that creep, going upon all four, shall be an abomination unto you.” I certainly hope so, because I know of no fowl that walks on four legs.

And speaking of abominations, how about the camel and the hare:

Now, these are silly examples.  This site goes through some 143 contradictions in the Bible and provides explanations for why they may seem like contradictions. Take a look through them; they are thorough.

This brings me to my second point: “Sure there are errors and contradictions in the Bible, but what is the point?”

Why does it matter that there may be errors in the Bible?  It matters (and doesn’t matter) depending on how we see the Bible.  If we see the Bible as a book of facts, if we believe everything in the Bible is a claim to truth, fact, and reality,then yes, I suppose it does matter if there are errors.

Girls! Girls! The Facts of Life.

And yet, we must dispute the very notion of “facts,” whether anything can indeed be verifiable or falsifiable. Sorry readers, but this is where it gets heady.

Now, we seek these “facts” to develop “truth claims,” which we use to construct/develop/emerge descriptions of verifiable realities, philosophies, ethics, politics, and faiths.

Whither we find or identify these “facts?” All sorts of venues of discovery have been argued as sources of these facts. Among them are nature itself, science and its method, human reason, personal experience, powers and authorities, and sacred writings.

Thus, we have come to the issue of the Bible, wherein many/some claim that the Bible is a source of these facts which are used in developing truth claims to reality and all it constitutes.

Is this so?  Is the Bible claiming to describe all of reality through presenting facts as truth claims to this reality?  I don’t think so.  I think the Bible is less than this, but paradoxically more than this.  It is not a fact book, it is so much more.  The truth that we encounter in the Bible is a truth that goes beyond facts and figures.

Then, what becomes of the Bible?  Tune in Wednesday as I answer “What is the Bible and what does it mean to you?”

Filed under Questions from my Sister