A terrifically intriguing series of articles came out over the course of the last few weeks.  The first was a piece from Vice, wherein Dora Mortimer provides a view of their own in posing the question “Can Straight People Be Queer?” In response, Chloë of After Ellen wrote a rebuttal aptly titled “No, Straight People Can’t Be Queer.” The dialectics of the internet can be, in this case, refreshingly simple, no?

If I really cared about a celebrity’s offspring’s sexuality, I’d put a picture here.

Using the recent phenomenon of younger celebrities (or more aptly, the offspring of stars) coming out as “genderfluid” or in other cases simple not wanting their sexuality to be labeled, Mortimer explores what exactly it means to be queer. Queer, being a catchall term for the phenomena listed above, is also a precariously elusive term where, as Mortimer writes, “it is a political persuasion as well as a sexual one.”

In the article, however, Mortimer interviews David Selley (who performs as Dianne Chorley), and inquires into the politics of him as a straight man performing in drag.  His sentiment, according to Mortimer, is that the “theater gives him the license to become someone else and politics has little to do with it.” The problem with this is simple: [I assert] politics is everything.

The term of queer emerges from the context of sexuality, wherefrom a politic (simply put, an ethic of community) emerges as those whose sexuality is deemed queer from the norm now exercise their presence and begin to self-identify.

This is the basis of identity politics: the critical study and its application of the oppressive systems that enforce identity as a means of solidifying power among a particular class of people over and against another class of people.  In the case of sexuality, the oppressive system is heteronormativity, wherein self-identified heterosexual persons with power oppress non-heterosexual persons.

Last night I attended a show in downtown Minneapolis, where one of the singers in one of the bands wore a dress throughout the performance.  The poor lad–the dress certainly did not suit him. While the red floodlights made it difficult to ascertain the color and fabric of the dress, it seemed to be the kind of sundress your stepfather’s mother would have worn in the late 1960s. The cut of the dress did not do justice for the man’s figure, with the hem rising far enough above the knee to make anyone, Catholic or Protestant, gasp in horror. However, if he incorporated a belt, perhaps it could have really pulled it all together…

…But I digress. Now, I cannot say whether the man was straight or gay or whatever (nor should I presume that this person identifies as a man), but I think my bet is safe saying he’s a straight man being that he was performing in a predominantly hipster band in a predominantly hipster venue (don’t get me started on hipsters and sexuality…).  But what did him wearing the dress mean? Was he even performing in drag?

In several ways, the first question is illegitimate (what’s the point), but the second one begs an answer, and in fact provides a glimpse at a redeeming reframing of the first question. In Gender Trouble, Judith Butler uses the case of drag performances to frame her theory of the performativity of gender: identity is not inherent or fixed, but rather constructed through actions. The problem is that sexual identities are created by heteronormative systems ‘writing the script’ of what it is to be straight or gay.

The Queens of Paris is Burning

So, a reframed critical question would be “are the performances performative?” Take for instance the documentary Paris is Burning, a glimpse into the lives of gay black men performing drag at the height of the HIV/AIDS crisis in New York. The documentary does an excellent work in capturing the performativity of the drag queens. Each queen has drafted an extensive narrative and world in her performance, from the Houses they belong too (drag cliques, for lack of a better term…) to the day to day life (such as spending all one’s money on gowns for the balls).

Is this the same for David/Dianne?  Is this the same for the man in the band with the dress?  While not wanting to make rash judgments, I would assume not. Thus, this is the first (of many problems) with Mortimer’s articles posing the question of “Can Straight People Be Queer?”

However, while agreeing on principle with Chloë’s argument that “No, Straight People Can’t Be Queer,” I do so for different reasons and in fact blatantly disagree with some of Chloë’s assumptions. But in the words of Michael Ende in his novel The Neverending Story, “but that is another story and shall be told another time.”  Good news is that the ‘another time’ is tomorrow.  Stay tuned! 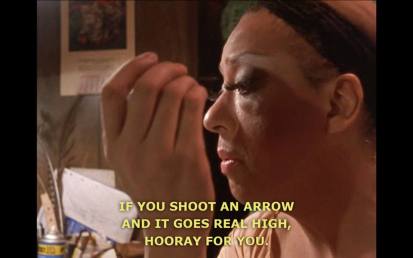 Filed under On Being Queer